Showing posts from October, 2009
Show all

October 18, 2009
By Obi Nwakanma, Vanguard My attempt this week is to bring some attention to the subject of the Asaba massacres, one of the haunting ghosts of Nigeria’s last civil war. I pay particular tribute to Emma Okocha – Onye Amuma Cable – author of Blood on the Niger, the chilling account of the Asaba massacres of October 7, 1967. More than any other individual, Okocha has pursued the Asaba story with the temerity of a survivor, and the hardnosed instincts of a well-trained journalist. He has brought attention to the great evil that Nigerians love to forget: the attempt at selective annihilation of a people through acts of terrible war crimes. Asaba has become Okocha’s life work; an obsession. He says it is to bring closure, and give final rest to those who perished that day in Asaba. But I suspect something much deeper and personal. Of course it is up close and personal for Emma Okocha. He is from Asaba; he survived the massacres; but his entire family perished. The Igbo name their child
1 comment
Read more 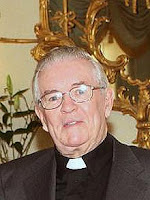 Written by John O'Shaughnessy, Limerick Post FATHER Aengus Finucane, the former Chief Executive of the Third World charity Concern, and a native of Limerick, where he was made a Freeman of the City, has died, aged 77. He died in the Spiritan Fathers’ nursing home in Kimmage after a short illness. The late Fr Finucane is survived by two sisters and three brothers. He was a product of Limerick CBS and later studied Philosophy, and was ordained a Holy Ghost priest in 1958. The Nigerian civil war four decades ago catapulted him into emergency aid. As a Spiritan missionary in Biafra, a region that was trying to breakaway from Nigeria, he was confronted with famine. He joined parishioners in braving bombing raids to unload relief cargoes at a local airstrip. Supporters of Fr Finucane and his fellow missionaries raised almost €4m and sent four shiploads of humanitarian aid. They founded Africa Concern. Minister of State for Overseas Development, Peter Power, expressed deep re
Post a Comment
Read more
More posts

BIAFRA: How To Build An Instant Airforce

December 05, 2007
Time Magazine Friday, June 06, 1969 Unventuresome Swedes spend their vacations at the seashore with wives and children. Count Carl Gustaf von Rosen, on the other hand, has left the family home this year and with four other men has gone off to Biafra on a big-game hunt of sorts. The weapon they chose is an odd one: a Swedish single-engine aircraft known as the MFI-9B trainer, equipped to hold twelve rockets in pods under its wing. The bag claimed so far has been equally unusual: it includes four MIGs, one Ilyushin 28, two Canberras, a Heron and a control tower, all belonging to the federal government of Nigeria. Psychological Lift. Von Rosen, 59, is a Swedish nobleman with a passion for airplanes and a penchant for underdogs. "Once I get into a plane," he says, "I feel that I can do just about anything as long as I believe in it." As a young man he flew a Heinkel air ambulance in Ethiopia, helping victims of Italian aggression. When Russia attacked Finland, he si
Read more

Sasa Ugwumba Kalu Nwoke. Image via Youtube There is an uncanny twist to the civil war which seems to blind those of us who should let the world know what really happened. I am talking about people from the former eastern region who were forced by genocide to become Biafrans in 1967. Sasa Ugwumba Kalu Nwoke was a class three student of the elite Government Secondary School, Afikpo, when the genocide began in 1966. Born into a comfortable middle-class home, his ambition was not to fight in any kind of war even if his Ohafia ancestors were warriors. A chance trip to the Enugu train station where he saw headless bodies and human parts brought in from Northern Nigeria turned him to a man. At school, he could neither bear the sorry sight nor console his junior, Nicholas Obasi. The boy’s father hid in a sack and watched as his pregnant wife was slaughtered in their Kano home. The foetus was not spared. At 16 years on January 28, 1968, Sasa forced his way into the Biafra Army
Read more