Showing posts from December, 2019
Show all

Biafrans Capitulate To Nigeria: US Increases Grant For Relief 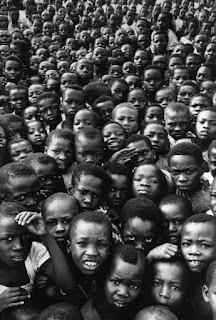 School children gather at the courtyard reminiscing the effects of the tragic. Image: A. Abbas/Magnum Photos (1971) BY LAWRENCE FELLOWS JANUARY 13, 1970 LAGOS, NIGERIA (THE NEW YORK TIMES) —Biafra, with its last de fenses crumbling and its supplies of food and ammunition exhausted, capitulated yesterday to the Nigerian Government. Brig. Philip Effiong, the Bi afran Chief of Staff, who took over the leadership Saturday night when Gen. Odumegwu Ojukwu fled the besieged remnant of the secessionist region, announced on the Biafran radio this afternoon that the attempt at secession had failed. [Unconfirmed reports from Lusaka, Zambia, said Monday night that General Ojukwu was expected to arrive with in the next day. It was un derstood that Zambia had of fered him asylum. Page 15.] Brigadier Effiong ordered Biafran forces to disengage from battle in an orderly fashion and said that he was sending representatives to Nigerian field commanders to negotiate an armistice. Gowo
Post a Comment
Read more 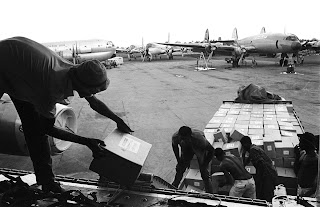 Loading of Joint Church Aid relief supplies on island of Sao Tomé. Photo: Peter Williams PETER WILLIAMS /CONCERN WORLDWIDE In the late 1960s, a rebellion in West Africa resulted in brutal warfare, the world’s first televised famine, an incredible humanitarian intervention, and the birth of several aid organizations — including Concern Worldwide. On July 6th 1967, an uprising began in Eastern Nigeria with the aim of gaining independence for the state of Biafra and its mostly Igbo population. The military government moved swiftly to crush the rebellion, and what followed was a two-and-a- half year war that would result in at least two million civilian deaths. The toll would have undoubtedly been higher were it not for the efforts of an ad hoc coalition of international humanitarian organizations and the establishment of what became known as the Biafran airlift. The secession attempt met with an unmerciful response, displacing millions of people who became further isolated by the
Post a Comment
Read more

Nigerian Writers Compare Genocide Of Igbos To The Holocaust

Biafran refugees flee federal Nigerian troops on a road near Ogbaku, Image: Kurt Scumpf/AP BY CHIGBO ARTHUR ANYADUBA During the massacre of Igbos in Nigeria between 1966 and 1970, one to three million people died . In the decades since, writers have worked to make sense of the immense human tragedy. These literary representations of the massacres use the Holocaust as an important point of reference. The war in Nigeria, with its associated mass atrocities, is arguably one of the first major moments in postcolonial Africa when accusations of genocide were made. Following military coups in Nigeria in 1966, the military and ethnic extremists systematically targeted and killed Igbos across the then Northern and Western regions of Nigeria . Massacres of Igbos and other Easterners across the country led to thousands of deaths and the displacement of millions. The massacres led the Eastern Region of Nigeria to declare its secession from Nigeria. The region was renamed the republic of Biaf
Post a Comment
Read more
More posts