Showing posts from January, 2020
Show all

Buried For 50 years: Britain’s Shameful Role In The Biafran War 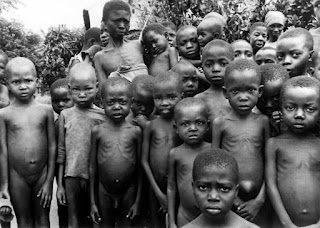 Desperately starved children in a refugee camp near Aba in 1968. Image: AFP BY FREDERICK FORSYTH It is a good thing to be proud of one’s country, and I am – most of the time. But it would be impossible to scan the centuries of Britain’s history without coming across a few incidents that evoke not pride but shame. Among those I would list are the creation by British officialdom in South Africa of the concentration camp, to persecute the families of Boers. Add to that the Amritsar massacre of 1919 and the Hola camps set up and run during the struggle against Mau Mau. But there is one truly disgusting policy practised by our officialdom during the lifetime of anyone over 50, and one word will suffice: Biafra. This referred to the civil war in Nigeria that ended 50 years ago this month. It stemmed from the decision of the people of the eastern region of that already riot-racked country to strike for independence as the Republic of Biafra. As I learned when I got there as a BB
Post a Comment
Read more

Nigeria: 50 Years Ago, The War Of Biafra Ended, A "Forgotten" Conflict In History Books 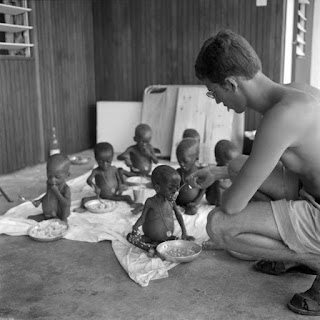 Malnourished Biafran children fed by a French medical personnel inside the French Hospital in Libreville, Gabon March 15, 1969. "The images in the media of malnourished children in the belly swollen disrupt international opinion Humanitarian organizations attempt to bypass Lagos reluctance suspects. - rightly -. Humanitarian convoys carrying weapons and mercenaries Of ' vols- pirates' are organized to bring food to the dying populations , " says Le Figaro . Doctors, especially French, come to treat the victims. The Médecins sans Frontières (MSF) movement was founded after this war.Image: AFP On January 15, 1970, this region of south-eastern Nigeria signed his surrender, ending a civil war that started in the spring of 1968 and that left millions of people dead and displaced. Even today, this history constitutes a veritable "black hole" in the collective memory of the country. "A fine mustache and a big smile, General Gowon (President of Nigeria,
Post a Comment
Read more

Gosport Grandmother Recalls Fleeing The Horrors Of War In Nigeria 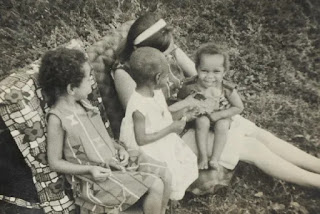 Leslie Mitchell with her daughters (l-r) Uche, Nnenna and Adaora in 1968. Image: Leslie Mitchell via The Portsmouth News BY ELISE SARGENT It may have happened more than 50 years ago, but Leslie Mitchell can still remember keenly the horrors she experienced in Nigeria after the county won its independence from Britain. In a country ravaged by civil war, Leslie and her young family were forced to join the procession of thousands of refugees searching for safety amid shocking violence and hunger. Along the way they picked up a desperately ill little girl who was simply abandoned by the side of the road. And they watched in terror as people were set on fire by mobs for supporting the ‘wrong’ side in the war. The breakaway republic of Biafra, in eastern Nigeria, where Leslie's husband Len was from, existed for just 30 months between 1967 and 1970. However, the destruction that ensued wrought repercussions through the generations. But how did Leslie end up there? From
Post a Comment
Read more
More posts