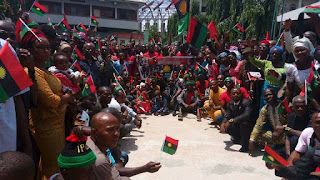 The Indigenous People of Biafra, IPOB, Monday, said that the Federal Government’s closure of the seaports in the South-South was to strangulate the economy of South-East.

This was part of a statement signed by IPOB’s Media and Publicity Secretary, Emma Powerful on Monday.

The IPOB described their continued closure as one of the injustices it had been fighting.

The statement added, “IPOB is about the liberation of all Biafra territories. Only mischief makers will imply otherwise.

“Yet, some people from the coastal part of Biafraland will beat their chest to admit to working towards one Nigeria and foolishly channel their grievances against the same IPOB that is trying to save all of us.

“These traitors hiding under the name of one pro-Biafra group or another cleverly forgot that their masters in the Federal Government have reached an agreement to build a dry port worth $250 million in Ibadan, while Igweocha a city the British colonial masters renamed Port Harcourt in Rivers State has no functional port.

“It is on record that I have consistently asked for the reopening of Warri, Calabar and Igweocha seaports.

“For those accusing us of making IPOB an Igbo affair, Warri is not in Igboland, neither is Calabar, but as anyone in the know will testify, I have always insisted these demands of reopening South-South seaports, be met before any formal dialogue can take place.

“It was not a Biafran or Igboman that killed Ken Saro Wiwa, neither was it an Igbo man that killed Adaka Boro. Why it is that Yoruba that support northern hegemony gets everything whereas the governing elite of the coastal region loyal to the North cannot attract the same level of interest?

“A new mega-seaport is being built in Badagry to add to Tin Can and Apapa Wharfs but South-South seaports were closed down to strangulate the economy of Biafra.

“They have railway lines crisscrossing the entire West, but there is nothing in our land (South South and South East).

“Where are the Fulani approved elites in the South-South or the Arewa Consultative Forum anointed leaders of South-East? Don’t we have resources for a Seaport site?, yet $250m will be spent to build an artificial one.

“These traitors will not fight their oppressor, but are comfortably happy to accept crumbs falling off the master’s table to fight IPOB, that is fighting to liberate them.

“I have never and will never collect money from anyone to sell or compromise our puritanical stance because unlike these stomach infrastructure agitators, I will sacrifice anything sacrificeable to get Biafra.

“I rejected every financial inducement when I was incarcerated and detained in Kuje, I would not insult myself by accepting anything from anybody now. I want to tell Ohaneze Ndigbo leaders, Igbo governors, PANDEF leaders and every other meaningless ‘settle me and my boys groups’ out there that our problem is their lack of patriotic discipline and weak mindedness. IPOB has gone way too far in this effort to restore Biafra.

“The jihadist Arewa core north have given N100 billion to Fulani Herdsmen killers, but how to stop 30th May Biafra Heroes Remembrance Day, is of paramount issue to Igbo politicians. Is this not the height of misplaced priorities?

“It’s a shame to the Old Eastern region, how the North keeps on messing with our brain because some people cannot afford to resist financial inducement. They keep on fooling our so called leaders and disgracing them out of power in the end.

“The level of humiliation and marginalization is now a shame to our region. What a shame…look at how Okoroawusa is being disgraced from pillar to post after serving his Fulani kinsmen. His only mistake is that he has an Igbo name. They have even forgotten that he is one of them. That is the extent of their hatred for anything Biafra.”

An Exchange on Biafra

December 07, 2007
The New York Review of Books Volume 14, Number 8 · April 23, 1970 By Sara S. Berry, George A. Elbert, Norman Thomas Uphoff, Reply by Stanley Diamond To the Editors: Stanley Diamond's article, "Who Killed Biafra?" (NYR, February 26) sets out to rescue us from the propaganda of governments seeking to justify their roles in the conflict. His discussion of the considerations which moved other nations to support one side or the other is plausible and informative, but sheds little light on the course of events in Nigeria and Biafra themselves. I have no reason to question Diamond's conclusion that Biafra was not "a puppet of reactionary forces," or the fact that the unequal supply of foreign arms and assistance to the belligerents was crucial to the outcome of the war. (Nor is it startling to learn that foreign powers supported one side or the other only insofar as they felt it would be in their own interests to do so; it hardly seems necessary to demonst
Read more