Perhaps the most important single reason for battered Biafra's continuing survival against the attacks of the Nigerian Federal Army is a steady infusion of French military aid. Although the French will not acknowledge their role, one of the worst-kept secrets of the war is the fact that armaments are flown into the secessionist state almost nightly from two former French colonies, Gabon and the Ivory Coast. Hard proof of responsibility for the arms lift, however, is hard to come by, as TIME Correspondent James Wilde reported from the Gabonese capital of Libreville:


EVERYBODY in this shabby capital knows about it, but few will talk. The unmarked planes, however, are there for all to see: four DC-4s, three DC-3s and a single Constellation, parked on the palm-lined seaside tarmac. Patient research shows that the aircraft have varied registration—French, German, Belgian, Zambian, Biafran and Gabonese. Each afternoon, three or four planes taxi to the nearby military airfield for loading, then take off for Biafra at 6 p.m. sharp. They return around midnight, after the 900-mile round trip. Just as predictable as the flights is the black Citroen, owned by the French security police, that follows me

There are two sets of pilots flying the Biafra run, one English-speaking and the other French, and they are carefully segregated. The English-speaking flyers are housed in the dilapidated, mosquito-ridden Hôtel de la Rèsidence, run by a waspish French brunette named Jackie, whose sole virtue seems to be that she is able to count in English. Eighteen of the pilots are Rhodesian and South African, all clad in the uniform of the British colonial in Africa: highly polished shoes, long socks, neatly pressed shorts and starched bush jackets. Carefully holding themselves apart are several ex-RAF types, moustached and bearded, who punctuate their clipped, casual conversation with dated bits of Battle of Britain slang like "wack-o," "bang-on," "piece of cake."

At the Rèsidence bar one night, a cheerful group strolled in after, as one put it, "delivering the goodies." Though the flyers had obviously been ordered not to talk about their employers, some relaxed sufficiently after several pink gins to joke about their cargoes of "birth-control pills"—or ammunition. "You only need one of them, mate," a pilot chuckled. All the pilots have one thing in common—they fly to get a stake. "I'm only in it for the money," one sad, balding man told me. "I've got a wife and five kids and I want to put a down payment on a house in Salisbury." Another Rhodesian had a second motive: "That Harold Wilson is a bastard. He's against Biafra and he's buggering us too. This is a chance to bugger him." Everyone roared with laughter.

The few French crews have a much pleasanter home. They are housed in the ultramodern Hotel Gamba, where they spend their off-duty time devouring expensive meals ($25 and up) and socking away wine at $15 a bottle. Clad in soiled shorts and sweat-stained shirts, their bare feet stuck into rubber Japanese zori, they look to be a much scruffier lot than the colonial swells at the Rèsidence. They are much more close-mouthed as well. All attempts to start conversations fail; their thin, long-nosed Gallic faces remain blank. 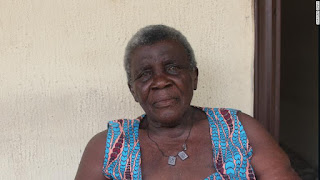